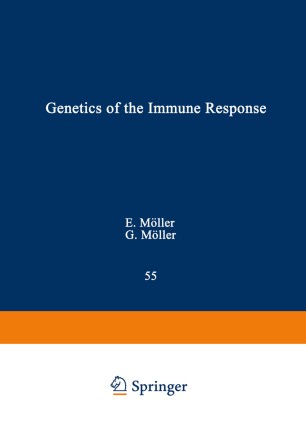 Genetics of the Immune Response

The 55th Nobel Symposium entitled "Genetics of the Immune Response" took place in Saltsjobaden, Sweden, June 15 - 17, 1982. The topic was selected for several reasons, such as the rapid progress in the genetic analysis of immunoglobulin and MHC genes and the elucidation of the mechanism of switch to different immunoglobulin classes and subclasses. The genetic advances formed a basis for discussions of problems relating to regulation of T cell subsets, mechanisms of activation and regulation of B cell differentiation and an analysis of the network hypothesis. The format of the symposium was arranged so as to include two sessions in the morning and two in the afternoon. Each session was introduced by one speaker, followed by free discussion. The intro­ ductory lectures are included in the proceedings. The participants summarized their contributions to the discussion in written form. In addi tion to the closed sessions, there was one open session at the Karolinska Institute with lectures by Drs. L. Hood, C. Milstein, D. Baltimore, J. Klein and B. Benacerraf, which are not included in these procee din gs. The symposium was sponsored by the Nobel Foundation and its Nobel Symposium Committee through grants from the Tercentenary Fund of the Bank of Sweden and the Knut & Alice Wallenberg Foundation. The Swedish Medical Research Council, the Swedish Cancer Society and the Swedish Ministry of Education and Cultural Affairs also made contri­ butions.