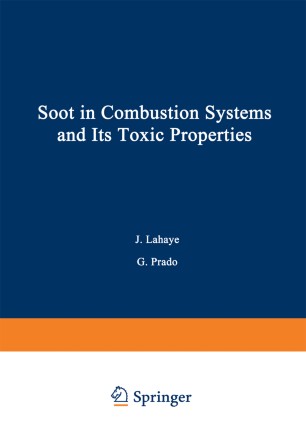 Soot in Combustion Systems and Its Toxic Properties

Our interest in Mulhouse for carbon black and soot began some 30 years ago when J.B. Donnet developed the concept of surface chemistry of carbon and its involvement in interactions with gas, liquid and solid phases. In the late sixties, we began to study soot formation in pyrolytic systems and later on in flames. The idea of organ1z1ng a meeting on soot formation originated some four or five years ago, through discussions among Professor J.B. Howard, Dr. A. D'Alessio and ourselves. At that time the scientific community was becoming aware of the necessity to strictly control soot formation and emission. Being involved in the study of surface properties of carbon black as well as of formation of soot, we realized that the combustion community was not always fully aware of the progress made by the physical-chemists on carbon black. Reciprocally, the carbon specialists were often ignoring the research carried out on soot in flames. One objective of this workshop was to stimulate discussions between these two scientific communities. During the preparation of the meeting, and especially during the review process by the Material Science Committee of the Scientific Affairs Division of N.A.T.O. the toxicological aspect emerged as being an important component to be addressed during the workshop. To reflect these preoccupations we invited biologists, physical­ chemists and engineers, all leaders in their field. The final programme is a compromise of the different aspects of the subject and was divided in five sessions.