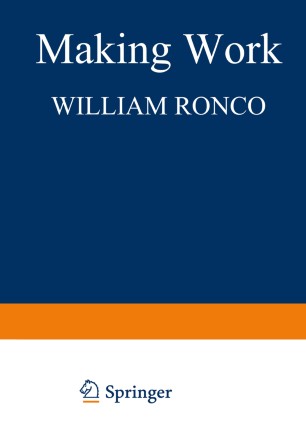 This book began as an exploration of collaborative work orga­ nizations. We knew about people in various occupations who had gotten together to form organizations of equals to man­ age the settings within which they did their work. Among these organizations were a teacher-controlled public school, a fishermen's cooperative, a potters' studio, a public-interest advocacy group, and an architectural firm. We wondered how these groups functioned, and whether and how they contributed to making work satisfying for the individuals in them. These groups were, of course, pretty small potatoes, but it seemed to us that they provided a way to an understanding of some much larger current issues. Worker satisfaction has surfaced as an issue of current concern and has been repre­ sented in research documenting the growing expectations that the members of our society have of their work experi­ ence. More workers are more educated now than ever before, and more and more people seem to look to work as a personal outlet, rather than just a source of income. We saw our small, egalitarian work organizations as providing settings in which people were especially likely to v vi PREFACE find work satisfying. We wanted to know both the organiza­ tional conditions for satisfying work and the conditions un­ der which collaborative work organizations could keep func­ tioning. Since the sociological literature on work satisfaction tends to revolve around issues of autonomy and control, we sought out settings in which workers had maximized autono­ my and control.