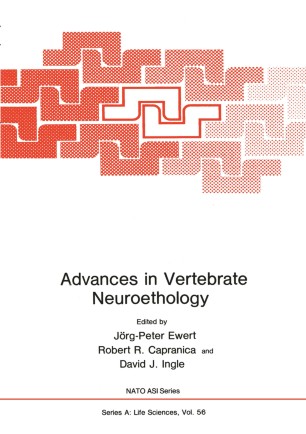 This volume presents the proceedings of the NATO Advanced Study Institute on "Advances in Vertebrate Neuroethology" held at the University of Kassel, Federal Republic of Germany in August 1981. During the last decade much progress has been made in understanding the neurophysiological bases of behavior in both vertebrates and invertebrates. The reason for this is that a number of new physiological, anatomical, and histochemical techniques have recently been developed for brain research which can now be combined with ethological methods for the analysis of animal behavior to form a new field of research known as "Neuroethology". The term Neuroethology was originally introduced by S.L.Brown and R.W.Hunsperger (1963) in connection with studies on the activation of agonistic behaviors by electrical brain stimulation in cats. Neuroethology was more closely defined by G.Hoyle (1970) in the context of a review on cellular mechanisms underlying behavior of invertebrates. Since the 6th annual meeting of the Society for Neuroscience held in Toronto in 1976, Neuroethology has become established as a session topic.