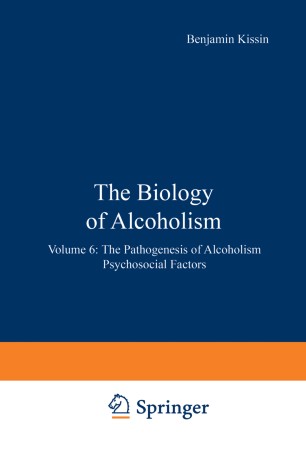 Pathogenesis is defined in Blakiston's Medical Dictional), as "the course of development of disease, including the sequence of processes or events from inception to the characteristic lesion or disease. " The central position of the word "pathogenesis" in the titles of Volumes 6 and 7 in itself connotes a bias on the part of the editors in favor of the disease concept of alcoholism, inasmuch as the end product of the pathogenetic process is presumed to be a disease. But the disease model as here conceptualized is vastly different from that of Jellinek, or of Alcoholics Anonymous, or of psychoanalysis. In those theories, alcoholism is seen as the inevitable consequence of some specific flaw in the heredity or the experience of the afflicted individual that inexorably leads to alcoholism. In these present volumes, the alcoholic syndrome is viewed rather as the outgrowth of the interaction of a variety of biological, psychological, and social influences which, depending on the predom­ inance of one or another, may lead to different types of alcoholism. This view, which has been labeled the bio-psycho-social perspective, encompasses a larger view of the dynamics of the development of alcoholism, incorporating data from each of the phenomenologic levels involved. An additional complication arises from the fact that the physiolog­ ical and psychosocial stigmata of alcoholics, which are probably most often the result of prolonged drinking, frequently have come to be considered as causes of the disease.