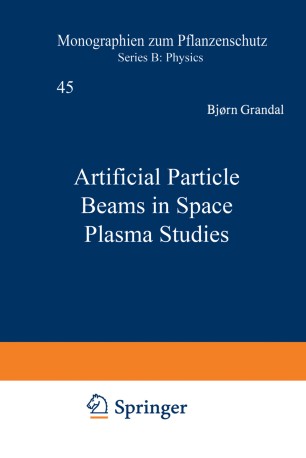 These proceedings are based upon the invited review papers and the research notes presented at the NATO Advanced Research Institute on "Artificial Particle Beams in Space Plasma Studies" held at Geilo, Norway April 21-26, 1981. In the last decade a number of research groups have employed artificial particle beams both from sounding rockets and satellites in order to study various ionospheric and magnetospheric phenomena. However, the artificial particle beams used in this manner have given rise to a number of puzzling effects. Thus, instead of being just a probe for studying the ambient magnetosphere, the artificial particle beams have presented a rich variety of plasma physics problems, in parti~ular various discharge phenomena, which in themselves are worthy of a careful study. The experimental studies in space using artificial particle beams have in turn given rise to both theore­ tical and laboratory studies. In the laboratory experi­ ments special attention has been paid to the problem of creating spacelike conditions in the vacuum chamber. The theoretical. work has addressed the question of beam­ plasma-neutral interaction with emphasis on the wave generation and the modified energy distributions of the charged particles. Numerical simulations have been used extensively. With the advent of the Space Shuttle in which several artificial particle beam experiments are planned for the 1980's, there is a growing interest in such experiments. Furthermore, there is a need for coordinating these studies, both in space and in the laboratory.