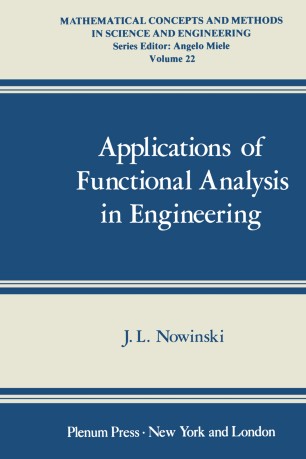 Applications of Functional Analysis in Engineering

Part of the Mathematical Concepts and Methods in Science and Engineering book series (MCSENG, volume 22)

Functional analysis owes its OrIgms to the discovery of certain striking analogies between apparently distinct disciplines of mathematics such as analysis, algebra, and geometry. At the turn of the nineteenth century, a number of observations, made sporadically over the preceding years, began to inspire systematic investigations into the common features of these three disciplines, which have developed rather independently of each other for so long. It was found that many concepts of this triad-analysis, algebra, geometry-could be incorporated into a single, but considerably more abstract, new discipline which came to be called functional analysis. In this way, many aspects of analysis and algebra acquired unexpected and pro­ found geometric meaning, while geometric methods inspired new lines of approach in analysis and algebra. A first significant step toward the unification and generalization of algebra, analysis, and geometry was taken by Hilbert in 1906, who studied the collection, later called 1 , composed of infinite sequences x = Xb X 2, ... , 2 X , ... , of numbers satisfying the condition that the sum Ik"= 1 X 2 converges. k k The collection 12 became a prototype of the class of collections known today as Hilbert spaces.