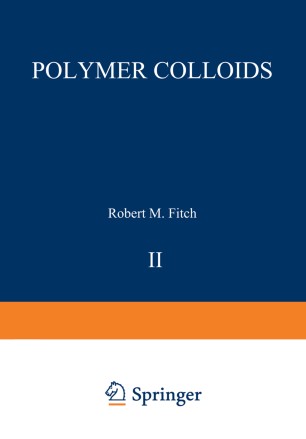 This volume is comprised of most of the papers presented at a symposium held in Miami Beach during the national meeting of the American Chemical Society in September, 1978. In a sense, it is a sequel to the first ACS symposium held on this topic and published under the title "Polymer Colloids" in 1971 by Plenum Press. That volume contained 12 papers, whereas "Polymer Colloids II" contains 33, an indication of the magnitude of the growth of the field in less than a decade. Increased sophistication probably best characterizes the changes which have taken place, especially in the realm of instru­ mentation. Ten years ago techniques such as quasielastic light scattering, X-ray photoelectron spectroscopy (XPS - also known as ESCA), ion scattering spectroscopy (ISS), ultrasonic absorption spectroscopy and hydrodynamic exclusion chromatography (REC) were unavailable to the polymer colloid chemist. Recent advances in all of these methods are described in this volume. Although the book deals primarily with "synthetic latexes" or "emulsion polymers" as colloids, there are a number of papers which deal with their synthesis: particle nucleation in emulsion polymer­ ization, the synthesis of emulsifier-free polymer colloids using novel reagents, molecular weight distributions derived from the kinetics of emulsion polymerization, and anionically polymerized non-aqueous polymer colloids. The kinetics and thermodynamics of the swelling of latex particles by monomers is also dealt with here.