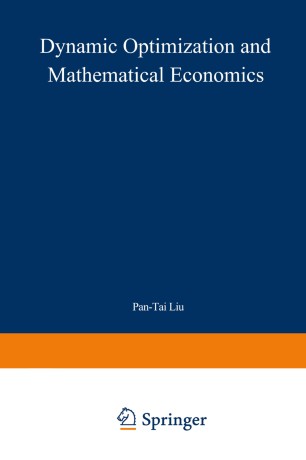 As an outgrowth of the advancement in modern control theory during the past 20 years, dynamic modeling and analysis of economic systems has become an important subject in the study of economic theory. Recent developments in dynamic utility, economic planning, and profit optimiza­ tion, for example, have been greatly influenced by results in optimal control, stabilization, estimation, optimization under conflicts, multi­ criteria optimization, control of large-scale systems, etc. The great success that has been achieved so far in utilizing modern control theory in economic systems should be attributed to the effort of control theorists as well as economists. Collaboration between the two groups of researchers has proven to be most successful in many instances; nevertheless, the gap between them has existed for some time. Whereas a control theorist frequently sets up a mathematically feasible model to obtain results that permit economic interpretations, an economist is concerned more with the fidelity of the model in representing a real­ world problem, and results that are obtained (through possibly less mathematical analysis) are due largely to economic insight. The papers appearing in this volume are divided into three parts. In Part I there are five papers on the application of control theory to economic planning. Part II contains five papers on exploration, exploita­ tion, and pricing of extractive natural resources. Finally, in Part III, some recent advances in large-scale systems and decentralized control appear.