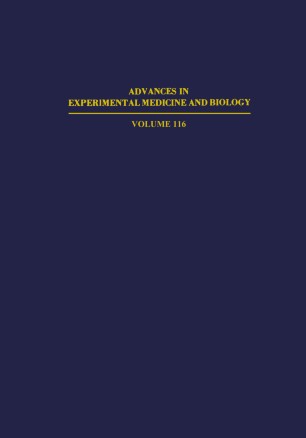 Part of the Advances in Experimental Medicine and Biology book series (AEMB, volume 116)

While neuroanatomy and neurophysiology were defining the unique features of the synapse as a site for cell to cell signaling in the late fifties, neurochemistry was establishing the identity and studying the biosynthetic pathways of monoamine neurotransmitters. Meanwhile, neuropsychiatry was keeping a vigilant eye on the outcome of this concerted effort with the untold hope that a genetic defect in neurotransmitter metabolism would ac­ count for the pathogenesis of certain psychiatric ill­ nesses. Thus, when neurochemists in the early sixties began to study the feasibility of measuring the metabolism of brain neurotransmitters in vivo, clinical biochemists eagerly adopted these methods to their needs and sought to verify whether inborn errors of transmitter biogenesis were a cause for at least certain forms of depression, mania and schizophrenia. Undoubtedly, it is still too early to evaluate the outcome of these studies. However, current opinion holds that gross inborn errors in transmitter metabolism do not anpear to be operative as a primary cause of psychia­ tric disorders. Though monoamine metabolism appears to be defective in certain groups of psychiatric disorders, the cause of these changes can at best be associated with changes in patterns of neuronal firing. It is generally believed that these persistent changes are determined by a number of unknown factors operative in various psychia­ tric illnesses. In the attempt to identify the molecular nature of these unknown factors, the focus of current research is directed toward transmitter receptors.