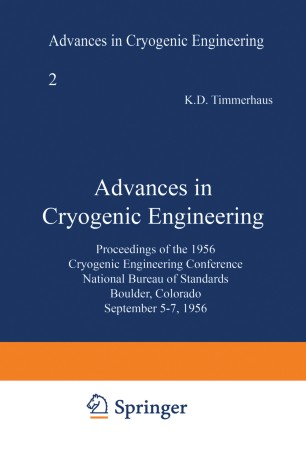 The National Bureau of Standards Boulder Laboratories was on September 5-7, 1956 again host to a national conference on cryogenic engineering. Supported financially by many of the leading industrial firms currently active in this rapidly expanding field, the conference, second of its kind, attracted more than 400 scientists and engineers from all parts of the world. This attendance was evidence of the present interest and growth in cryogenic engineering, a field which has as yet not found a satisfactory place within the bounds of existing professional societies. In all but two cases the Proceedings contain the summary or entire text of the paper presented at the confer­ ence. Forty-nine papers were presented at seven separate sessions. These sessions were divided into the following general topics: Cryogenic Processes Cryogenic Equipment Cryogenic Properties Cryogenic Applications Bubble Chambers The division in some cases had to be somewhat arbitrary since several papers could have been classified under more than one general topic. To make the Proceedings more valuable to the reader, an attempt was made to record the general discussion which followed each paper. Unfortunately, however, the recording devices were not sensitive enough for clear reproduction. The discussions, therefore, have not been included in the Proceed­ ings.