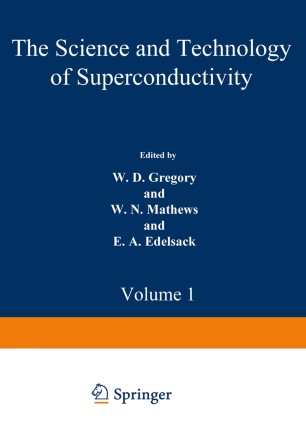 The Science and Technology of Superconductivity

Since the discovery of superconductivity in 1911 by H. Kamerlingh Onnes, of the order of half a billion dollars has been spent on research directed toward understanding and utiliz­ ing this phenomenon. This investment has gained us fundamental understanding in the form of a microscopic theory of superconduc­ tivity. Moreover, superconductivity has been transformed from a laboratory curiosity to the basis of some of the most sensitive and accurate measuring devices known, a whole host of other elec­ tronic devices, a soon-to-be new international standard for the volt, a prototype generation of superconducting motors and gener­ ators, and magnets producing the highest continuous magnetic fields yet produced by man. The promise of more efficient means of power transmission and mass transportation, a new generation of superconducting motors and generators, and computers and other electronic devices with superconducting circuit elements is all too clear. The realization of controlled thermonuclear fusion is perhaps totally dependent upon the creation of enormous magnetic fields over large volumes by some future generation of supercon­ ducting magnets. Nevertheless, whether or not the technological promise of superconductivity comes to full flower depends as much, and perhaps more, upon economic and political factors as it does upon new technological and scientific breakthroughs. The basic science of superconductivity and its technological implications were the subject of a short course on "The Science and Technology of Superconductivity" held at Georgetown University, Washington, D. C. , during 13-26 August 1971.