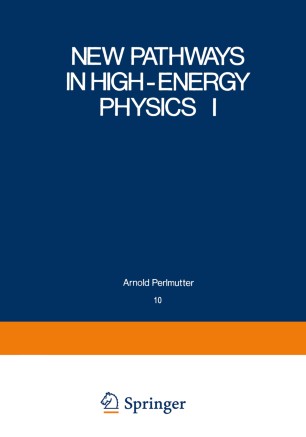 New Pathways in High-Energy Physics I

Magnetic Charge and Other Fundamental Approaches

Part of the Studies in the Natural Sciences book series (SNS, volume 10)

This year, Orbis Scientiae 1976, dedicated to the Bicentennial of the United States of America, was devoted entirely to recent developments in high energy These proceedings contain nearly all of the physics. papers presented at Orbis, held at the Center for Theoretical Studies, University of Miami, during January 19-22, 1976. The organization of Orbis this year was due mainly to the moderators of the sessions, principally Sydney Meshkov, Murray Gell-Mann, Yoichiro Nambu, Glennys Farrar, Fred Zachariasen and Behram Kursunoglu, who was also chairman of the conference. The coherence of the various sessions is due to their efforts, and special thanks are due to Sydney Meshkov who was responsible for coor­ dinating many.of the efforts of the moderators and for including essentially all of the frontier developments in high energy physics. Because of the number of papers and their integrated length, it has been necessary to divide these proceedings into two volumes. An effort has been made to divide the material in the two volumes into fundamental questions (including the appearance of magnetic charge in particle physics) and recent high energy results and attendant phenomenology. These volumes were prepared by Mrs. Helga Billings, Mrs. Elva Brady and Ms. Yvonne Leber, and their dedication and skill are gratefully acknowledged. Their efforts v PREFACE during Orbis were supplemented by those of Mrs. Jacquelyn Zagursky, with our appreciation. The ~hoto­ graphs were taken by Ms. Shirley Busch.