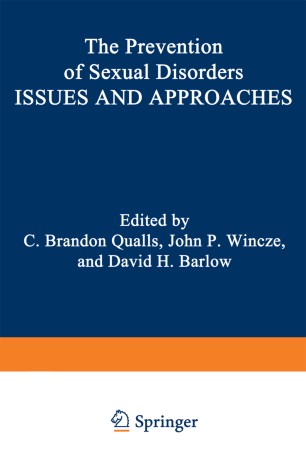 The Prevention of Sexual Disorders

Part of the Perspectives in Sexuality book series (Persp. Sex.)

As new faculty members in the Section of Psychiatry and Human Behavior at Brown University, we began collaborating on research into assessment and treatment of sexual problems in the fall of 1975. Although each of us arrived with clinical and research in­ terests in the broad field of sexual problems, the idea for this book grew out of our early discussions and a consensus on the future direction of research. We noted that there had been an extremely rapid increase in knowledge of human sexual behavior as well as sexual disorders and their treatment over the last few decades. It has also become increasingly apparent that sexual problems, broadly conceived, comprise a sizable fraction of the problems for which people seek treatment, and that, although the treatment of sexual problems was achieving some success, treatment was for the most part slow, costly, and without any guarantee of successful outcome. Furthermore, there were many people with sexual prob­ lems for whom treatment was not available. With these ideas in mind, it seemed timely for investigators in the field of human sex­ uality and its disorders to turn their attention to the problem of prevention. Organizing a symposium on the topic enabled us to invite leading investigators in the study of sexual behavior to address this area. The chapters in this volume are an outgrowth and refinement of the formal papers delivered at the symposium, which was held in the spring of 1976.