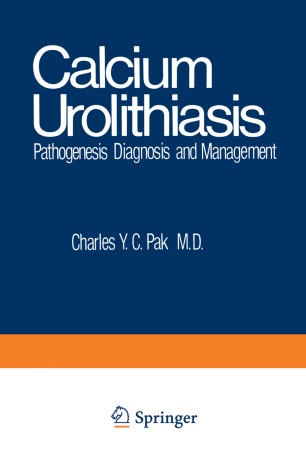 "People . . . see you sweat in agony, turn pale, turn red, trem­ ble, vomit your very blood, suffer strange contractions and con­ vulsions, sometimes shed great tears from your eyes, discharge thick, black and frightful urine, or have it stopped up by some sharp rough stone that cruelly pricks and flays the neck of your penis. " * These 16th century frustrations of Michel de Montaigne which most graphically reflect his experience with renal colic still plague approximately 1 per 1000 individuals in the United States annually. Since as many as 75% of clinically. apparent episodes of renal colic represent single nonrecurring events, physicians not in­ frequently approach the differential diagnosis of nephrolithiasis in a less than adequate fashion and assume that the incident may prob­ ably never recur after the single attack. However, the ureteral or bladder stone actually represents one form of abnormal crystalline precipitation; parenchymal nephrocalcinosis, silently progressive azotemia, and asymptomatic renal pelvic calculi may also stem from the same pathological process(es) which conditioned the for­ mation of the ureteral or bladder stone. In this regard it is worth emphasizing that the postmortem incidence of renal calculi is some tenfold greater than that presumed from surveys wherein a clinical attack of nephrolithiasis is the sole determinant. *In Familiar Medical Quotations. M. B. Strauss, Ed. Little Brown, Boston, 1968, p. 646. v vi FOREWORD The last decade has witnessed the birth of new knowledge in urolithiasis research.