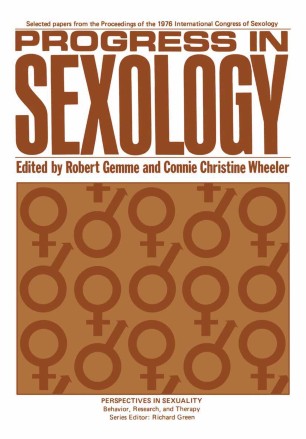 Part of the Perspectives in Sexuality book series (Persp. Sex.)

As editor of the series "Perspectives in Sexuality: Behavior, Research, and Therapy," I consider it a major scholarly achievement to publish selected proceedings of the Second International Congress of Sexology. Never before have so many professional organizations supported such a conference or so many scholars, from so many coun­ tries, participated in such a conference. Eighteen countries were represented; over one hundred papers were presented. The Congress and these proceedings mark an historical mile­ stone for sexology in international scientific cooperation. The collaboration of so many researchers from diverse disciplines fur­ ther illuminates the interdisciplinary approach. The papers pre­ sented reflect the challenge accepted by scientists to compare varieties of techniques and programs, to develop new theories and creative approaches in their investigations, and to initiate sci­ entific study of heretofore taboo areas of inquiry. Clearly, sexology has come of age. It takes its place among the respected scientific disciplines. This monumental achievement, the Second International Congress of Sexology, signals the emer­ gence at the international level of Sexology as Science. Richard Green ix Preface The Second International Congress of Sexology was held in Montreal, Canada on October 28-31, 1976. Researchers of interna­ tional acclaim from eighteen countries presented progress reports in specialities as endocrinology, neurophysiology, infertility, contraception, sexual dysfunction, ethics in sex research and sex education. The Congress, whose theme was "international progress in sexology," had as its scientific objective a wide range of sub­ jects concerning the interdisciplinary study of sexology from many areas of the world.