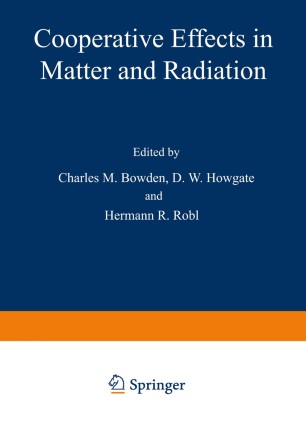 Cooperative Effects in Matter and Radiation

This volume contains the large majority of the papers presented at the Cooperative Effects Meeting which was held as part of the US Army Sponsored Symposium on New Laser Concepts at Redstone Arsenal, Alabama, from November 30 through December 2, 1976. The motivation for the meeting was to bring together a representative cross-section of research scientists active in related areas of cooperative effects in matter-radiation field interaction and coherent pulse generation and propagation. An emphasis was placed upon the rapidly developing areas of superradiance and superf1uorescence, with a balance between theory and experiment in regard to the choice of speakers. This meeting came at a very fortunate time when new experimental results in metal vapors and gases have just recently been realized. Also represented on the programwereareas dealing with new laser concepts such as the free electron laser and two photon amplifier. A few supplemental papers are included in this volume which were authored by participants at the meeting, but were not present on the agenda, primarily due to limited time. These were included because of their relation to the content of papers which were presented and/or were the subject of discussion among attendees. The meeting consisted of eleven invited papers and two work­ shop sessions, each with a panel. The order of the papers in this volume generally follows the order of their presentation on the agenda. However, the supplemental papers have been inserted where appropriate.