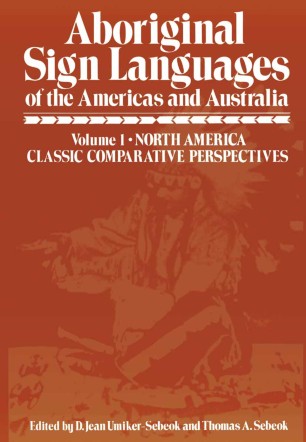 1. THE SEMIOTIC CHARACTER OF ABORIGINAL SIGN LANGUAGES In our culture, language, especially in its spoken manifestation, is the much vaunted hallmark of humanity, the diagnostic trait of man that has made possible the creation of a civilization unknown to any other terrestrial organism. Through our inheritance of a /aculte du langage, culture is in a sense bred inta man. And yet, language is viewed as a force wh ich can destroy us through its potential for objectification and classification. According to popular mythology, the naming of the animals of Eden, while giving Adam and Eve a certain power over nature, also destroyed the prelinguistic harmony between them and the rest of the natural world and contributed to their eventual expulsion from paradise. Later, the post-Babel development of diverse language families isolated man from man as weIl as from nature (Steiner 1975). Language, in other words, as the central force animating human culture, is both our salvation and damnation. Our constant war with words (Shands 1971) is waged on both internal and external battlegrounds. This culturally determined ambivalence toward language is particularly appar­ ent when we encounter humans or hominoid animals who, for one reason or another, must rely upon gestural forms of communication.