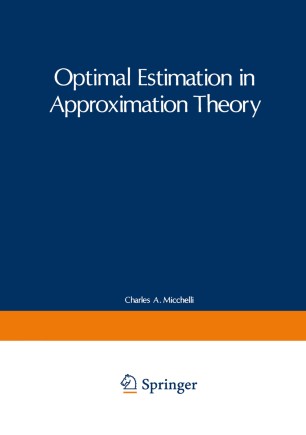 The papers in this volume were presented at an International Symposium on Optimal Estimation in Approximation Theory which was held in Freudenstadt, Federal Republic of Germany, September 27-29, 1976. The symposium was sponsored by the IBM World Trade Europe/Middle East/Africa Corporation, Paris, and IBM Germany. On behalf of all the participants we wish to express our appreciation to the spon­ sors for their generous support. In the past few years the quantification of the notion of com­ plexity for various important computational procedures (e. g. multi­ plication of numbers or matrices) has been widely studied. Some such concepts are necessary ingredients in the quest for optimal, or nearly optimal, algorithms. The purpose of this symposium was to present recent results of similar character in the field or ap­ proximation theory, as well as to describe the algorithms currently being used in important areas of application of approximation theory such as: crystallography, data transmission systems, cartography, reconstruction from x-rays, planning of radiation treatment, optical perception, analysis of decay processes and inertial navigation system control. It was the hope of the organizers that this con­ frontation of theory and practice would be of benefit to both groups. Whatever success th•~ symposium had is due, in no small part, to the generous and wise scientific counsel of Professor Helmut Werner, to whom the organizers are most grateful. Dr. T. J. Rivlin Dr. P. Schweitzer IBM T. J. Watson Research Center IBM Germany Scientific and Education Programs Yorktown Heights, N. Y.