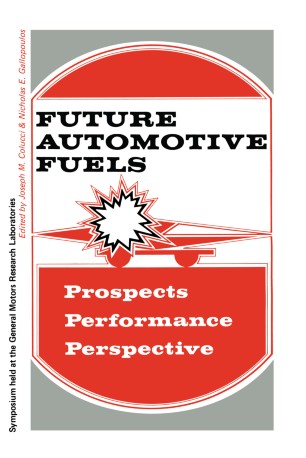 In October 1975, while the United States was still acutely feeling the aftermath of the 1973 Arab Oil Embargo, the General Motors Research Laboratories held its nineteenth annual symposium. The proceedings of this timely symposium on "Future Automotive Fuels - Prospects, Performance, and Perspective" are reported in this book. We hope that it will serve not only as a permanent record of the papers and discussions, but also as a stimulus and inspiration for ideas, research, and development in the vital field of automotive fuels. The economy of the United States and the lifestyle of her people are woven together with energy into a unique fabric. Reducing the energy content of this fabric weakens it and can even destroy it. The Oil Embargo stunningly demonstrated how easy it is to attack this fabric, and exposed for all to see its greatest weaknes- reliance on imported petroleum. Since petroleum is the only current source of automotive fuels, and cars and trucks consume about 43 percent of the petroleum used in the United States, the Oil Embargo had its most profound and dramatic on automotive transportation: First there were long lines at service stations, impact and then idle lines in car assembly plants and long lines at unemployment offices. Against this grim setting, we planned the symposium on automotive fuels for the future.