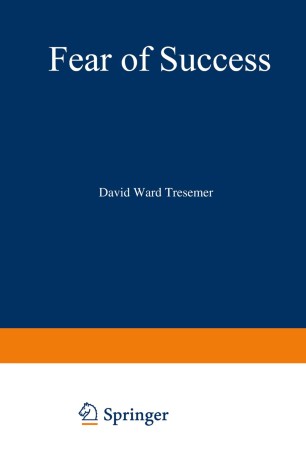 Nought's had, all's spent, Where our desire is got without content: 'Tis safer to be that which we destroy Than by destruction dwell in doubtful joy. So speaks Lady Macbeth upon the attainment of the aim of her ambition (act 3, scene 2). Is this expression of a fear of success the consequence of the highly competitive arena in which she is striving to achieve? Will this sentiment later lead to the avoidance of this or other forms of success? Does she fear success because she is a woman? While the fear and avoidance of success are ideas that are not new to psychology or to human behavior, recent work by Matina Homer has excited great interest in the psychological measure of a personal disposition to avoid success and a behavioral measure of that avoidance. It is with this recent wave of research and writing that Part II of this book is concerned. Great personal interest was stimulated in the "fear of success" concept. It is not only the hypochondriacs who find in the idea of a "fear of success" syndrome an explanation for the course of their lives. In Part I are presented the earlier forms which the concept of "fear of success" took, especially in psychoanalytic theory and per­ sonality theory, originating with Freud's discussion of "those wrecked by success," but citing some of the much older cultural traditions involving a fear and/or avoidance of success.