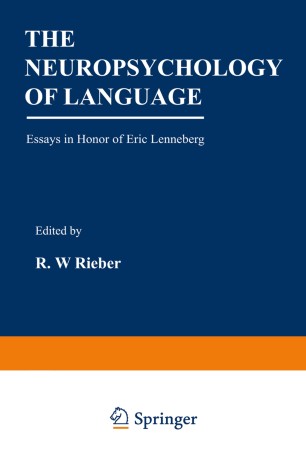 The Neuropsychology of Language

Essays in Honor of Eric Lenneberg

The essays in this volume have been gathered together to honor Eric H. Lenneberg. Together they represent the broad range of topics in which he took some interest. For one of the distinguishing features of Eric Lenneberg's theoretical work was its synthesizing quality. He was interested in all of the scientific domains that might touch on the study of the mind and brain, and he carefully prepared himself in each of the pertinent disciplines. Beginning with his M. A. degree in linguistics from the University of Chicago in 1951, he went on to complete his doctoral studies in both linguistics and psychology at Harvard in 1955. This was followed by three years of postdoctoral specialization at Harvard Medical School in both neurology and chil­ dren's developmental disorders. This preparation and additional expe­ rience at the Children's Hospital Medical Center in Boston led directly to his now-classic monograph on the neuropsychology of language, The Biological Foundations of Language, which was published in 1967. It is interesting to note that while each of the essays grows out of empirical evidence, all without exception attempt to attain a level of theoretical explanation and generalization which is frequently missing from experimental work per se. Here again Lenneberg's work was no­ table for the vigor with which he sought out explanations and theories from neuropsychological data. In particular, hjs thesis that "language is the manifestation of species-specific cognitive propensities" was a hypothesis which he drew from necessarily indirect evidence.