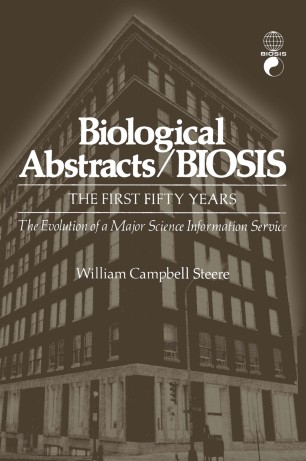 The First Fifty Years. The Evolution of a Major Science Information Service

A fiftieth birthday is a good one to celebrate-old enough to be ex­ perienced and mature, but not so old as to be an antique. And if the fifty years have spanned as much change in scientific affairs as has occurred during the lifetime of Biological Abstracts it is surely time for a stocktaking. The leaders of biology in 1926 simply could not have imagined the condi­ tions of 1976. And few biologists active in 1976 can imagine what 1926 was like. That was before the explosive growth of federal funds for research and development, before the huge swelling of graduate enrollments and degrees, before World War II, even before the Great Depression! A few old-timers can remember 1926, and Bill Steere will forgive me for calling him an old-timer. After all, he provides the evidence himself; as a graduate student he met the first editor when Biological Abstracts was only three years old, and he has known all its later editors and administra­ tive officers. What he does not say is that tn length of service to BIOSIS, in seniority, he stands among only a few past and present members of the board of trustees; nor does he mention that at least as frequently as any other biologist he has been called upon to serve on governmental and associational councils and committees dealing with policy and strategy concerning the abstracting, classification, and dissemination of scientific knowledge. Surely he was the right choice to write this history.