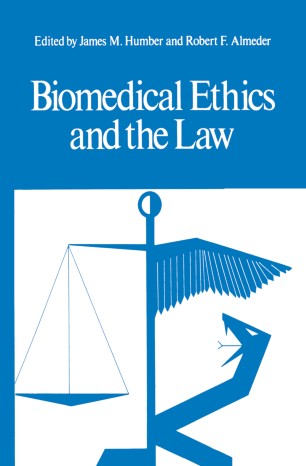 Biomedical Ethics and the Law

In the past few years an increasing number of colleges and universities have added courses in biomedical ethics to their curricula. To some extent, these additions serve to satisfy student demands for "relevance. " But it is also true that such changes reflect a deepening desire on the part of the academic community to deal effectively with a host of problems which must be solved if we are to have a health-care delivery system which is efficient, humane, and just. To a large degree, these problems are the unique result of both rapidly changing moral values and dramatic advances in biomedical technology. The past decade has witnessed sudden and conspicuous controversy over the morality and legality of new practices relating to abortion, therapy for the mentally ill, experimentation using human subjects, forms of genetic interven­ tion, suicide, and euthanasia. Malpractice suits abound and astronomical fees for malpractice insurance threaten the very possibility of medical and health-care practice. Without the backing of a clear moral consensus, the law is frequently forced into resolving these conflicts only to see the moral issues involved still hotly debated and the validity of existing law further questioned. In the case of abortion, for example, the laws have changed radically, and the widely pub­ licized recent conviction of Dr. Edelin in Boston has done little to foster a moral consensus or even render the exact status of the law beyond reasonable question.