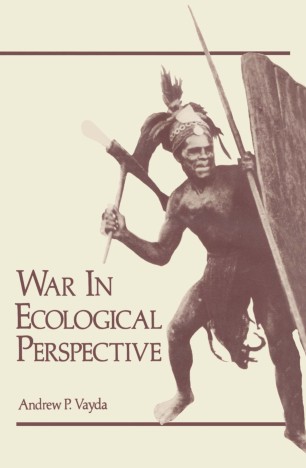 This book deals with war in three Oceanian societies. More specifi­ cally, it analyzes the following: the process of war in relation to population pressure among New Guinea's Maring people; exten­ sion and contraction in the headhunting activities of the Iban people of Sarawak during the nineteenth century; and the disrup­ tion resulting from the introduction of muskets in the warfare of the Maoris of New Zealand. In all of the analyses, I have viewed war as a process rather than simply as something that either does or does not occur and I have tried to see how the process relates to environmental problems or perturbations actually faced by people. The use of such an approach can, I believe, lead to important understandings about war and, more generally, about how people respond to environmental problems. A goal in this book is to show that this is so. Although it is only relatively recently that the significance of viewing war as a process became clear to me, my interest in war in relation to environmental and demographic phenomena is of long vii viii Preface standing. The beginning of the studies resulting in the present book can, in fact, be said to date back to the mid-1950s when I was in New Zealand to do library research for my Ph. D. dissertation on Maori warfare.