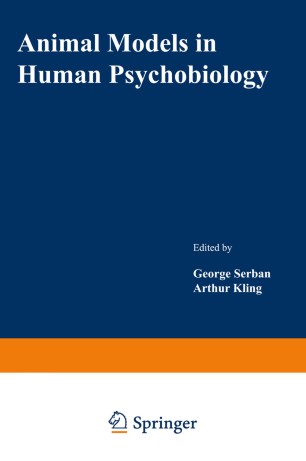 In March, 1974, an International Symposium was held at the Harmonie Club in New York to discuss a highly pertinent problem in today's research: the "Rele­ vance of the Animal Psychopathological Model to the Human." This meeting was sponsored by the Kittay Foundation, which brought together an outstanding group of scientists involved in widely different fields of research. This volume, it is hoped, will convey the tone of lively and cordial exchange between inter­ nationally renowned investigators, including Dr. I. Eibl-Eibesfeldt from Germany, Dr. Robert A. Hinde from England, Dr. Edward F. Domino from Michigan, and Dr. Pierre Pichot from France, Chairman of the Steering Committee. In his welcoming address, Mr. Sol Kittay reminded us that man has achieved remarkable control over his environment but not over himself, and he suggested that we should reexamine our ancestral origins, and search in animal behavior for clues to the understanding of normal and abnormal behavior in man.