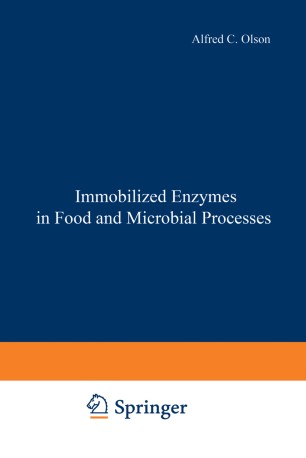 In the last five years the potential value of immobilized enzymes has captured the imagination of an increasing number of scientists and engineers. The concept of being able to create an immobilized derivative of an enzyme which has long-term stability and is able to be recovered and reused is fascinating, to say the least. Since the industrial application of enzymes has been mostly in the food and microbial process industry it is not surprising that many of the applications of immobilized enzymes considered for commercial development fall within the area of this industry. It is for this reason that we organized a symposium on immobilized enzymes for the 166th National Meeting of the American Chemical Society. Appropriately, the symposium was jointly sponsored by the Division of Agricultural and Food Chemistry and the Division of Microbial Chemistry and Technology. Although there were at least half a dozen symposia at other meetings on various aspects of immobilized enzyme technology in the preceding ten months none had specifically addressed themselves to food and microbial processes and none had been held at a meeting such as the National ACS gathering, which is not only large but multidisciplinary. The enthusiastic response to this symposium prompted us, at the invita­ tion of Plenum Press, to publish the proceedings of this symposium.