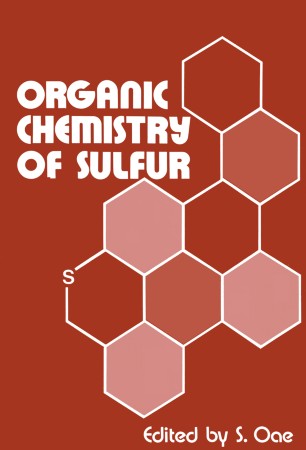 In recent years organic sulfur chemistry has been growing at an even faster pace than the very rapid development in other fields of chemistry. This phenomenal growth is undoubtedly a reflection of industrial and public demands: not only was sulfur recently in overall surplus for the first time in the history of the chemical industry but it has now become a prin­ cipal environmental hazard in the form of sulfur dioxide, sulfuric acid and hydrogen sulfide. Another reason, discernible in the last fifteen years, has been the desire, on the part of individual chemists and all types of research managers, to move away from the established chemistry of carbon into the less well understood and sometimes virgin chemistries of the other elements which form covalent bonds. As a result of this movement the last decade has seen the development of sulfur chemistry into a well-organized and now much better understood branch of organic chemistry. Enough of the detail has become clear to see mechanistic interrelationships between previously unconnected reactions and with this clarification the whole subject has in tum become systema­ tized and subdivided. The divalent sulfur chemistry of thiols, monosulfides, disulfides and polysulfides is a large area in itself, much of it devoted to oxidation-reduction and the breakage and formation of sulfur-sulfur bonds, although interesting discoveries are now being made about the reac­ tivity of certain sulfur-carbon bonds. Of course, this area has its own mas­ sive biochemical branch involving enzymes and proteins.