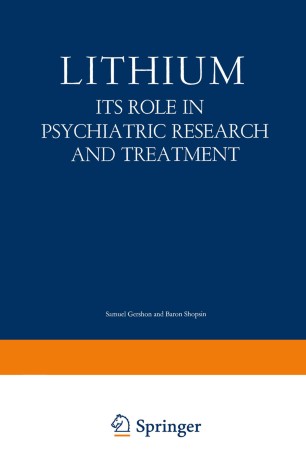 Its Role in Psychiatric Research and Treatment

Psychopharmacology has certainly had the greatest impact on psy­ chiatric theory and practice since the psychoanalytic discoveries by Freud. Beginning more than 20 years ago, psychopharmacology has become a vigorous interdisciplinary science, and over the last 10 to 15 years has witnessed a tremendous growth both from a scientific and practical point of view. Lithium occupies a unique and central position in modern psycho­ pharmacology for several reasons. The introduction of the lithium ion in 1949 as a psychoactive drug preceded the advent of reserpine or chlorprom­ azine and placed it as the first agent in the modern era of pharmacopsy­ chiatry. In fact, this first report on the use of lithium by an Australian clinician set a pattern to be followed for all other major groups of psychoac­ tive chemical agents. Unlike the now established antipsychotic and antidepressant drugs, however, no reliable predictions based on preclinical pharmacological studies were available about the profile of lithium's clinical activity. This problem of clinical predictability based on current preclinical pharmacological studies is now surfacing with the advent of many newer investigational psychoactive agents. As in the introduction of other therapeutic modalities in medicine, including psychiatry, serendipity was the midwife for lithium. The use of this ion in psychiatry, from its fortuitous introduction by Cade in 1949 to its present-day acceptance as a universal treatment modality in the affective emotional disorders, presents, however, a clear example of a hapless lag between discovery and application.