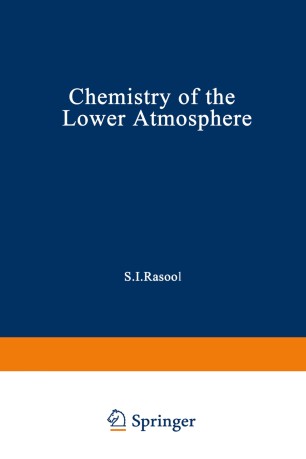 Chemistry of the Lower Atmosphere

About three years ago Catherine de Berg and I published a short article in Nature in which we attempted to explain why the chemistry of the atmosphere of the Earth is today so completely different from that of our two neighbor­ ing planets, Mars and Venus. Our atmosphere is composed mainly of N2 and O with traces of A, H0, CO , 0 , etc. , while the atmospheres of both 2 2 2 3 Mars and Venus are almost entirely made up of CO , Also, the Earth appears 2 to be the only one ofthe three planets which has oceans ofliquid water on the surface. Since the presence of liquid water on Earth is probably an essential requirement for life to have originated and evolved to its present state, the question of the apparent absence ofliquid water on Mars and Venus suddenly acquires significant proportions. In our paper in Nature, and later in a more detailed discussion of the subject (Planetary Atmospheres, in Exobiology, edited by C. Ponnamperuma, North Holland Publishing Co. ), we tried to describe why we believe that in the early history of the solar system all the terrestrial planets lost the atmospheres of H2 and He which they had acquired from the solar nebula at the time of their formation. These planets, completely devoid of atmos­ pheres, like the Moon today, started accumulating new gases which were exhumed from the interior by the commencement of volcanic activity.