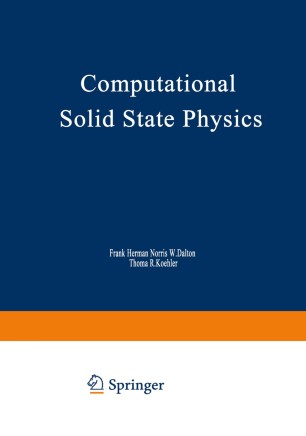 Proceedings of an International Symposium Held October 6–8, 1971, in Wildbad, Germany

During the past 20 years, solid state physics has become one of the major branches of physics. 1-2 Today over one-third of all scientific articles published in physics deal with solid state 3 topics. During the last two decades, there has also been ra~id growth of scientific computation in a wide variety of fields. -5 The combination of solid state physics and comp~tation may be termed computational solid state physics. This emerging field is distin­ guished from theoretical solid state physics only to the extent that electronic computers rather than slide rules or backs of envelopes are used to solve numerical or logical problems, test scientific hypotheses, and discover the essential physical content of formal mathematical theories. Papers in computational solid state physics are widely scatter­ ed in the literature. They can be found in the traditional physics journals and review series, such as The Physical Review and Solid State Physics; in more specialized publications, such as Journal of Computational Physics, Computer Physics Communications, and Methods in Computational Physics; and in the proceedings of a number of re­ 6 9 cent conferences and seminar courses. - Plans for holding an International Symposium on Computational Solid State Physics in early October 1971 were formulated by Dr.