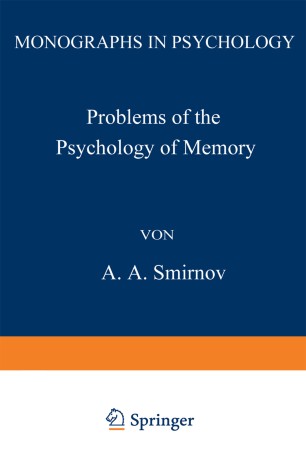 Problems of the Psychology of Memory

Part of the Monographs in Psychology book series (MOPSY)

Contrary to popular opinion, contemporary psychology in the USSR is far from being monolithic. It is true that the development of Soviet psychology does have characteristic features which distinguish it from the development of Western (and particularly Anglo-American) psychology. Perhaps the most distinguishing features of Soviet psychology are represented by the pre­ dominance of the historical-evolutionary approach and the emphasis on integrative physiological mechanisms underlying behavior. The development of Soviet psychological thinking can also be characterized as having been free of the fruitless discussions of mind-body dualism and of dominance by rat-and-pigeon-centered behaviorism. Soviet psychology had the benefit of a rich inheritance from the Sech­ that laid the foundation for modern psycho­ enov-Botkin-Pavlov school biology and biological psychiatry. Unfortunately, the politically engendered omnipresent dogmatism during the Lysenko-Stalin era of obscurantism tended to pervert this rich scientific heritage and hindered the development of a diversity of concepts and methods in the behavioral and biological sciences.