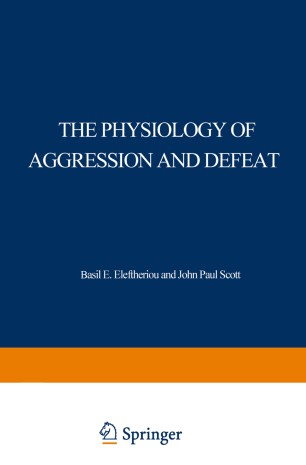 The Physiology of Aggression and Defeat

Proceedings of a symposium held during the meeting of the American Association for the Advancement of Science in Dallas, Texas, in December 1968

This short volume contains papers presented at a special symposium, "The Physiology of Aggression and Defeat," during the MAS meetings in Dallas, Texas, in December, 1968. At a time when we need to understand the basic mechan­ isms underlying various forms of aggression, these papers report progress toward this goal. Although the many social, psychologic and economic causal mechanisms contributing to aggression have been reasonably well-understood for a number of years, the correlated physiological, biochemical, endocrinological and neurochemical changes taking place in an organism that is either the aggressor or the recipient of aggression have not been studied extensively, and the limited available data in the past have often been in con­ siderable conflict. These eight papers demonstrate that complex interac­ tions take place among the psychological, social, physio­ logical, biochemical, endocrinological and neurochemical factors involved in aggression and defeat. The general indications are that while the aggressor learns to survive and adapts readily to the fighting process, the vanquished, if he does not die, maintains an existence highlighted by severe and extensive changes in all physiologic and psycho­ logic systems. We cannot make sweeping generalizations to the human organism from the results of non-human animal experimentation. Nevertheless, it is well-known that in all animals, including the human, similar basic biochemi­ cal systems are involved.