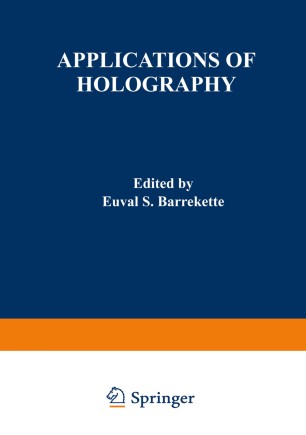 Holography has matured over the years since it was first invented by Dennis Gabor and further developed by many workers during the last decade. With some applications a commercial reality and many more continually appearing, it is now possible to compile a volume devoted to the applications of holography. This book consists primarily of papers presented at the second U.S. Japan Seminar on holography, held in Washington, D.C., from October 20-27, 1969, under the auspices of the National Academy of Sciences, National Science Foundation, and the Japanese Society for the Promotion of Science. In addition to most of the papers presented at the seminar, several others are included because they cover important applications which are appropriate to this volume. Attendance at the seminar was limited to ten delegates from each country; these delegates being chosen so as to permit the seminar to include as wide a range of subjects as possible, with each delegate being recognized as an authority in his particular field of holography. In addition, Dr. Gilbert Devey (Program 'Director for Engineering Systems for the National Science Foundation, and the one most responsible for making the seminar possible), Professor Wolf F.