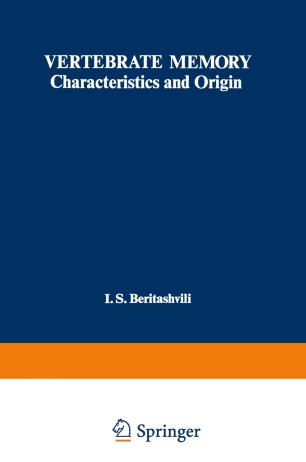 activity, relevant both to animals and to man. This part of our study was summarized in 1947 in the book, On the Basic Forms of Neural and Psycho­ neural Activity. Then, in the 1940's and 1950's, we carried out a multifaceted study of spatial orientation in the environment, one of the higher forms of psychic activity of vertebrates and man. In the study of spatial orientation, which is based entirely on psychic memory, we come even closer to the study of the latter. The roles of visual, auditory, vestibular, olfactory, and proprio­ ceptive receptors, and the dependence of memory on them for orientation in space were investigated, along with the roles of different regions of the cortex and other parts of the brain in these manifestations of memory. The results of this investigation were summarized in 1959 in the book, On Neural Mechanisms of Spatial Orientation in Higher Vertebrates. In the last ten years we have set ourselves the goal of a multifaceted study of the origin of image memory in different representatives of the vertebrate series, from fish to monkeys inclusively.