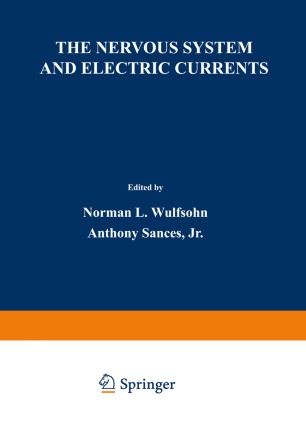 The Nervous System and Electric Currents

The brain is one of the most fascinating organs of the body, which delicately controls the thoughts and activities of Man from moment to moment. While much information has been accumulated over the years as to its anatomical and physiological functions, little research has been devoted to determine the effects of electrical fields upon this organ. Therefore, a group of interested researchers formed the Neuro-Electric Society to provide a forum for studying the effects of electrical currents upon the related nuerophysio­ logical determinates. ~luch of this research has been directed to­ wards the production of sleep or a state of anesthesia by trans­ cranially applied electrical currents. The Neuro-Electric Society is a national society which holds annual conferences, bringing together a wide variety of scientists with skills in various fields such as anesthesiology,biomathematics, biomedical engineering, neuro-anatomy, neurology, neurophysiology, neurosurgery, pharmacology, psychiatry and psychology. Subsequent to a number of meetings of various interested groups, the first annual meeting of the Neuro-Electric Society was held in Milwaukee, Wisconsin in October 1967, and the second in San Francisco, California in February 1969. The third conference is to be held at Las Vegas, Nevada, March 23-25, 1970.