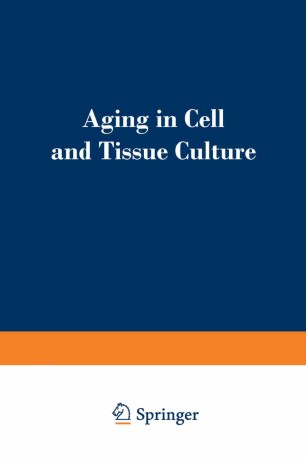 Aging in Cell and Tissue Culture

Proceedings of a symposium on “Aging in Cell and Tissue Culture” held at the annual meeting of the European Tissue Culture Society at the Castle of Žinkovy in Czechoslovakia, May 7–10, 1969

The annual meeting of the European Tissue Culture ., Society was held at the Castle of Zinkovy in Czechoslovakia from May 7-10,1969. Included as part of this meeting was a symposium on "Aging in Cell and Tissue Culture." This volume contains the papers presented at that symposium. The use of cell and tissue culture techniques to study the mechanism of aging is not new. For example, it has long been known that age-associated changes which occur in plasma can inhibit cell proliferation in vitro; also that the time lapse prior to cell migration from ex­ planted tissue fragments increases with increasing age. These are both examples of the expression in vitro of aging in vivo. More recently, attention has been focused on the occurrence of senescence in vitro. These investi­ gations have included studies of alterations in non­ dividing cell cultures, and to a somewhat greater extent, of age-related changes in the proliferative capacity of cells in vitro. For example, cells derived from human fetal lung retain many properties of normal cells including a stable normal diploid karyotype and these cultures have been shown to have a limited life-span in vitro. In addi­ tion, cultures derived from human adult lung show the same normal characteristics and appear to have a shorter life­ span than cells derived from fetal lung.