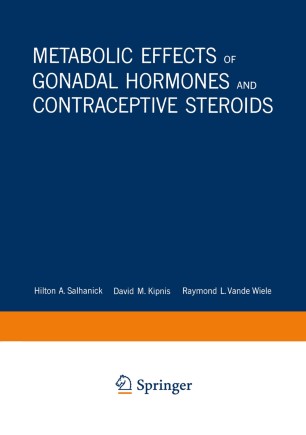 The Center for Population Research of the National Institute of Child Health and Human Development began operations in August 1968 and is engaged in research dealing with health-related popula­ tion problems. We organize and support projects for the develop­ ment of new contraceptives and in the broad field of population research in the social sciences o The Center also supports a variety of projects dealing with the mechanism of action and medical effects of contraceptives now in use, particularly oral contraceptives and intrauterine devices. These studies were initiated several years ago at the specific direction of Congresso We were pleased, therefore, with the opportunity to help organize and support this important and timely conference on the "Metabolic Effects of Gonadal Hormones and Contraceptive Steroids," the subject of which forms an integral part of the Center's research program. April, 1969 Philip Ao Corfman Director Center for Population Research National Institute of Child Health and Human Development v PREFACE Progress in science is often associated with either a "sixth sense" or an inevitable timeliness. Both factors, perhaps, led the members of the Endocrinology Study Section of the National Institutes of Health to propose, in 1966, that an expanded view of the effects of gonadal hormones, in general, and the contra­ ceptive steroids, in particular. was needed. There had been ample evaluations of the clinical symptomatology, contraceptive efficacy, and effects on the reproductive system, but there was a dearth of information on their multiple systemic'metabolic effects.