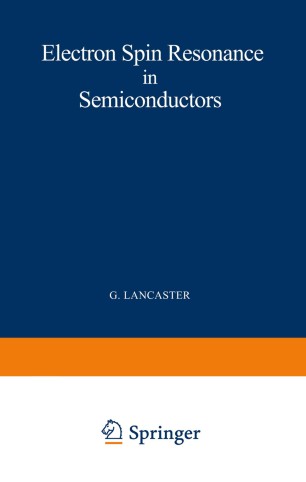 Since the study of the solid state began it has been necessary to use increasingly refined experimental techniques, of which electron spin resonance is an important example, in the effort to gain information concerning the structure and properties of an immense and varied range of solids. In the last two decades the great commercial demand for solid-state electronic devices has stimulated research into the funda­ mental properties of semiconductors. At the same time as semiconductor devices were becoming techno­ logically important, the technique of electron spin resonance was first being used on a large scale, principally at the Clarendon Laboratory, Oxford. Both solid-state physics and electron spin resonance have now reached the stage where they are useful to each other, primarily in the realm of the atomic properties of matter. Dr Lancaster's book is one of a series of monographs that aims at covering as comprehensively as possible the field of electron spin resonance. His book has been written for those who wish to know some­ thing about the way in which the electron spin resonance technique has been used in the study of semiconductors. It also has value for specialists who may need an authoritative work of reference, and for workers in allied subjects who wish to use this technique to further their work. Much of his treatise deals with electron spin resonance in crystals of silicon and germanium containing specific impurities, as these materials are of greatest interest. Practical results are discussed wherever possible.