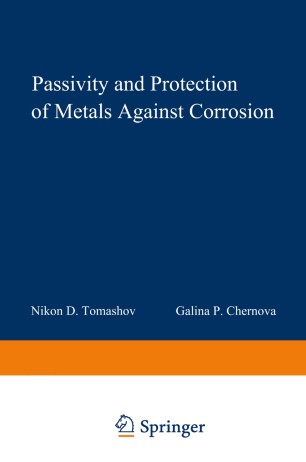 Passivity and Protection of Metals Against Corrosion

Considerable progress has been made in the past 20 years toward understanding the basic mechanisms of corrosion, and the application of this knowledge to its control. From the very beginning, educational institutions and industrial research laboratories have contributed greatly toward determining and elucidating the fundamental principles of corrosion reactions. Some of the basic principles involved in cor­ rosion of metals can be credited to early investigators. Michael Faraday in 1830-1840 studied the relationship between the quantity of a metal dissolved and the electric current which was produced by this reaction. He also proposed that the passivation of iron was through the formation of a film and that the dissolution of a metal was electro­ chemical in nature. Sir Humphrey Davy in 1824 worked out the funda­ mentals of galvanic corrosion of ships' hulls and applied sacrificial zinc anodes to protect them from sea water corrosion. Richard Arlie in 1847 demonstrated that corrosion produced by oxygen at the surface of iron in a flowing stream generated a current. With the fundamental knowledge available to him from these early investigators, Willis Rodney Whitney developed and expressed, in its most useful form, one of the basic scientific principles which provides modern corrosion specialists with a fundamental basis of corrosion control. Dr. Whitney concluded that corrosion of iron is electrochemical, and that the rate is simply a function of the electromotive force and resistance of the circuit.