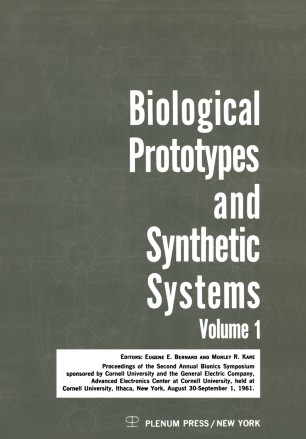 When the present symposium was first conceived, it was decided that more emphasis be given to contributions from biological laboratories than has typically appeared in previous bionics meetings. Accordingly, most of the invited speakers are biologists, in the broad sense of representing some area of the life sciences. Likewise, many of the submitted papers eventually chosen by the technical com­ mittee were from the life sCiences, rather than the physical sciences or mathe­ matics. In this way, it was hoped that a greater direct interest in the technological problems of bionics might be stimulated among biologists, upon whose work much of the success of bionics necessarily lies. Because of the wide interdisciplinary span of the papers, it was necessary to impose some artificial organization upon them, specifically for continuity in the transactions. We elected to put the biological papers first, followed by those which deal with reasonably specific models, and reserveto the last those papers reporting models which are more general in nature. The editorial function was kept to a minimum, with no major alterations of content and few of style being exercised. Several of the papers delivered at the symposium required a longer format for clarity and are included here in ex­ panded versions. Assitance in the preparation of this volume was received from the National Institute of Neurologic Diseases and Blindness, Grant number B-3896.