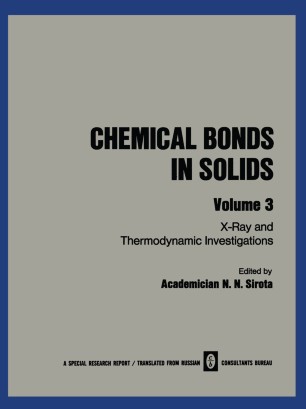 The present four volumes, published under the collective title of "Chemical Bonds in Solids," are the translation of the two Russian books "Chemical Bonds in Crystals" and "Chemical Bonds in Semiconductors." These contain the papers presented at the Conference on Chemical Bonds held in Minsk between May 28 and June 3, 1967, together with a few other papers (denoted by an asterisk) which have been specially incorporated. Earlier collections (also published by the Nauka i Tekhnika Press of the Belorussian Academy of Sciences) were entitled "Chemical Bonds in Semiconductors and Solids" (1965) and "Chemical Bonds in Semiconductors and Thermody­ namics" (1966) and are available in English editions from Consultants Bureau, New York (pub­ lished in 1967 and 1968, respectively). The subject of chemical bonds in crystals, including semiconductors, has recently become highly topical and has attracted the interest of a wide circle of physicists, chemists, and engineers. Until recently, the most successful description of the properties of solids (including semi­ conductors) has been provided by the band theory, which still dominates the physics of solids. Nevertheless, it is clear that the most universal approach is that based on the general theory of chemical bonds in crystals, in which details of the electron distributions between atoms and of the wave functions appear quite expliCitly.