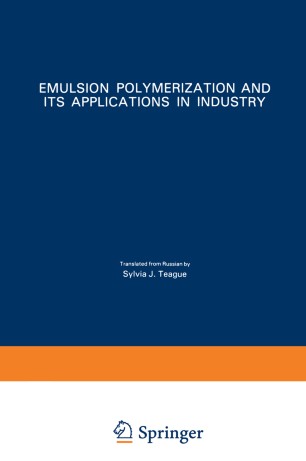 Emulsion Polymerization and Its Applications in Industry

There is a large body of Soviet work on emulsion polymerization, spanning a period of over three decades, that has been published primarily in the Russian language. Most of this has remained untranslated into English and hence un­ available to most other scientists. The value of this book lies primarily in the fact that it brings together the most important of these Soviet contributions, along with comment and analysis by the authors, who may be considered among the foremost authorities in this field in the Soviet Union. But the hundreds of literature citations go far beyond the borders of the Soviet Union and serve as an excellent bibliography of the world literature on emulsion polymerization up to the time this book was written. The book covers both fundamental and applied aspects. In the former are included discussions of particle formation mechanisms, a comprehensive theory of emulsion polymerization, copolymerization of polar monomers, and particle morphology and its implications with regard to derived film properties. Among the applied aspects are discussions of continuous emulsion polymerization, both tubular reactors and continuous stirred tank cascades, and various aspects con­ cerning the manufacture of some of the most important monomers, such as styrene, butadiene, vinyl acetate, methyl methacrylate, acrylonitrile, and chloroprene. This book will be an indispensable reference source for scientists who are entering the field as well as those who are experienced and who have wanted a ready access to this large body of literature.