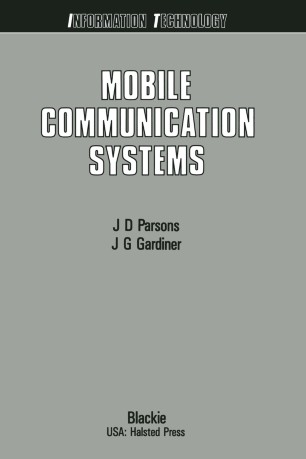 During the past decade there has been a dramatic change in the nature of mobile communications technology and its impact on the general communic­ ations environment. In the 1970s, mobile radio was a minority activity in communications, based on relatively unsophisticated technology. The 1980s, however, have seen the emergence of analogue cellular systems and the definition of future digital systems, and the predicted demand for these services is such that investigations into the use of higher frequency bands have already begun. It is predicted that, by the late 1990s, the 'personal communications' world will have resulted in the majority of adults in Europe and North America being dependent on radio-connected terminals of various kinds for more than 50% of their total telecommunications needs. The technology which will form the basis of this revolution has now been defined, at least in outline, and the fixed and mobile equipment that will be used in systems of the future will bear little resemblance to that available even ten years ago. It is impossible within the confines of a single, relatively short book to cover all the subject areas needed for a study of this exciting and expanding field of technology. We have, perforce, been selective and have chosen those topics which we believe to be of primary importance at the present time.