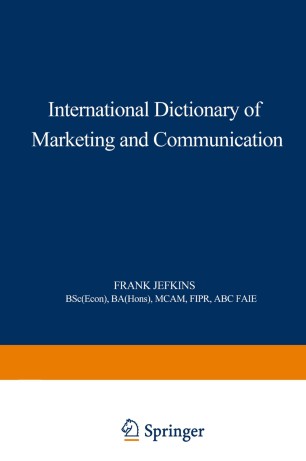 International Dictionary of Marketing and Communication

This dictionary covers marketing communications in the broadest sense, including advertising, but also extending to public relations which concerns many organizations not involved in marketing and which have little to do with advertising. Entries have been gathered from around the world, and this dictionary will therefore be valuable to those operating in an international environ­ ment where different term~, or terms with different spellings, are used. There are also terms with different meanings, depending on their country of origin. For example, in the UK newspapers are called press media, while in the USA the term print media is more usual. In the UK, print usually applies to printed items, such as sales or edu!;;ational literature. Likewise, there are big differences between European and American broadcasting systems, and sponsored radio or TV can mean different things around the world. Outdoor advertising also has different terminology in different countries, especially in North America and the UK. In many cases, alternative British and American terms are given, while some are either European or American. Some terminology is specific to a certain country. Entries have been collected from all parts of the world, including the oramedia or folk media of the Third World. Financial terms have been included because of their increasing im­ portance in advertising and public relations, and the dictionary reflects the increasing relevance of satellites and computers.