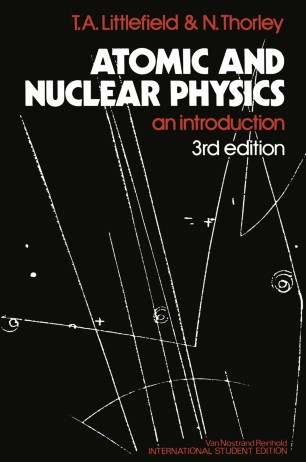 After the death of Dr. Littlefield it was decided that I should undertake the revision ofthe whole of Atomic and Nuclear Physics: an Introduction for the third edition, and it was soon apparent that major changes were necessary. I am confident that these changes would have had Dr. Littlefield's approval. The prime consideration for the present edition has been to modernize at a minimum cost. As much as possible of the second edition has therefore been retained, but where changes have been made they have been fairly drastic. Thus the chapters on fine structure, wave mechanics, the vector model of the atom, Pauli's principle and the Zeeman effect have been completely restructured. The chapters on nuclear models, cosmic rays, fusion systems and fundamental particles have been brought up to date while a new chapter on charm and the latest ideas on quarks has been included. It is hoped that the presentation of the last named will give readers a feeling that physics research can be full of adventure and surprises.