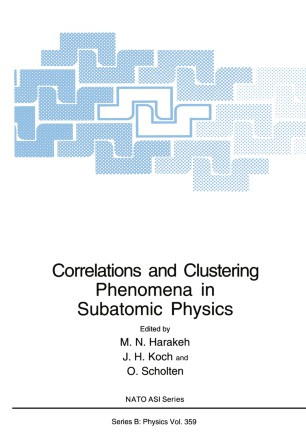 In many areas of physics, such as astrophysics, solid-state physics, nuclear physics and particle physics, a major outstanding problem is a better understanding of corre­ lation phenomena. While in most cases the average properties of a system are rather well understood, the correlations and the resulting clustering are poorly understood. They are reflections of the force mediating the interaction among the constituents and play essential roles in determining the structure of a physical system. At the largest scales, in astrophysics, it has recently been realized that there are huge voids in space and almost all matter is concentrated on filaments, raising interesting questions concerning the origin of this clustering of matter. In nuclear physics corre­ lation phenomena are important in all its subfields. It has been realized that so-called fluctuations in the one-particle density, which are a manifestation of nucleon-nucleon correlations, are crucial. These are important for an understanding of heavy-ion reac­ tions. This is the subject of modern quantum transport theories. Correlations are also crucial in the description of the high momentum components as observed in quasi-elastic knock-out reactions.