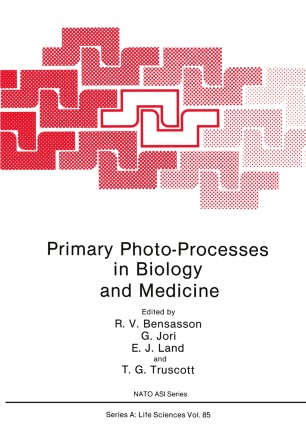 Primary Photo-Processes in Biology and Medicine

Recently there have been major developments in the experimental techniques available for the study of the primary events following the absorption of ultra-violet and visible radiation by biological systems. These techniques, which include absorption, emission, resonance Raman, electron spin resonance, nuclear magnetic resonance and photoacoustic spectroscopies, can be used to study the fate of transient species with lifetimes ranging from seconds to nanoseconds and extending in some cases, such as laser flash photolysis, to pico 12 15 (10- S)- and even femtoseconds (10- s). In parallel with these developments there has been a dramatic increase in the use of light in medicine via the direct photochemical alteration of endogenous molecules (phototherapy) or via the photoactivation of drugs in the skin or other tissue (photochemotherapy). Thus neonatal hyperbili­ rubinaemia can be routinely treated by phototherapy and psoriasis is frequently treated by PUVA photochemotherapy. A promising new photo­ chemotherapy used the phototoxicity of porphyrin drugs activated by red light to destroy solid malignant tumors. While some of the overall qualitative effects of such treatments are known, only recently have we begun to understand the associated molecular mechanisms. The primary molecular processes involve short-lived species. The pur­ pose of this Advanced Study Institute was to review some newer experi­ mental techniques for the study of such species, the application of these techniques to biological and medical systems and to examine the value of such information in phototherapeutic situations.