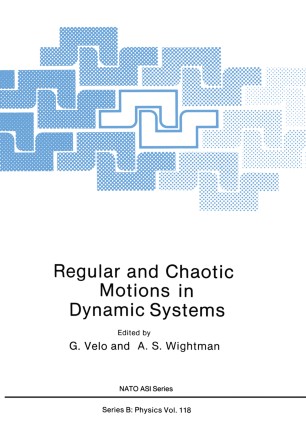 The fifth International School ~ Mathematical Physics was held at the Ettore Majorana Centro della Culture Scientifica, Erice, Sicily, 2 to 14 July 1983. The present volume collects lecture notes on the session which was devoted to'Regular and Chaotic Motions in Dynamlcal Systems. The School was a NATO Advanced Study Institute sponsored by the Italian Ministry of Public Education, the Italian Ministry of Scientific and Technological Research and the Regional Sicilian Government. Many of the fundamental problems of this subject go back to Poincare and have been recognized in recent years as being of basic importance in a variety of physical contexts: stability of orbits in accelerators, and in plasma and galactic dynamics, occurrence of chaotic motions in the excitations of solids, etc. This period of intense interest on the part of physicists followed nearly a half a century of neglect in which research in the subject was almost entirely carried out by mathematicians. It is an in­ dication of the difficulty of some of the problems involved that even after a century we do not have anything like a satisfactory solution.