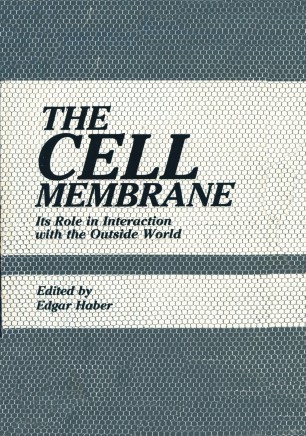 Its Role in Interaction with the Outside World

The contents of this book reflect a symposium held in honor of Professor Herman Kalckar's seventy-fifth birthday. His impact on the history of biochemistry is reflected by the diversity of the contributions of his former students and friends. Speakers came from Asia, Europe, and the United States to discuss both procaryotes and eukaryotes. The unifying theme was the cell membrane, both its organization and its function. Ektobiology, a topic that has held the attention of Professor Kalckar for many years, was clearly defined as a central topic in biology. This subject deals with the key structure whereby the cell interacts with the outside world and which, in a sense, defines the boundary between what is the cell and what is not. Topics discussed include the biogenesis of membrane proteins, sugars and lipids, the role of membrane components in osmoregula­ tion, and mechanisms of nutrient transport. Of great interest is the system for surface recognition evolved in vertebrates, exemplified by the HLA system of man. Neoplasia causes changes in the cell membrane that may be of significant future potential in the diagnosis and treatment of malignancies as well as in the understanding of the process of transformation. The changes in glycosphingolipids and carbohydrate antigens in relation to oncogenesis are detailed. I should like to recognize Doctors Kurt J. Isselbacher, Phillips W. Robbins, Victor Ginsburg, and Hiroshi Nikaido for their ,assistance in organizing the symposium. Ms. Jean Brumbaugh deserves special thanks for putting this book together.